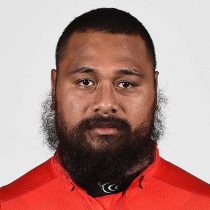 Manu joined the Chiefs after two seasons with the Blues. The explosive prop is a strong, fast and agile ball carrier.

Manu was in the Auckland Academy and the Blues wider training squad before being called into the starting line up against the Waratahs in 2011.

Manu rejoined the Blues for the 2017 season, following 3 successful seasons at the Chiefs that saw him reach 50 Super Rugby caps.

He started in the first 11 games where he proved a punishing prop at set piece and important leader on and off the field.

The Counties Manukau prop became a key contributor after moving back to the Blues from the Chiefs in 2017.

Ahead of the 2018 Super Rugby season Manu has played in 66 Super Rugby matches and has scored two tries.

Manu featured in all 16 of the Blues Super Rugby matches in 2018 and signed a deal with Hino Red Dolphins for the Super Rugby offseason.

In December he signed for the Sunwolves for the 2019 season.